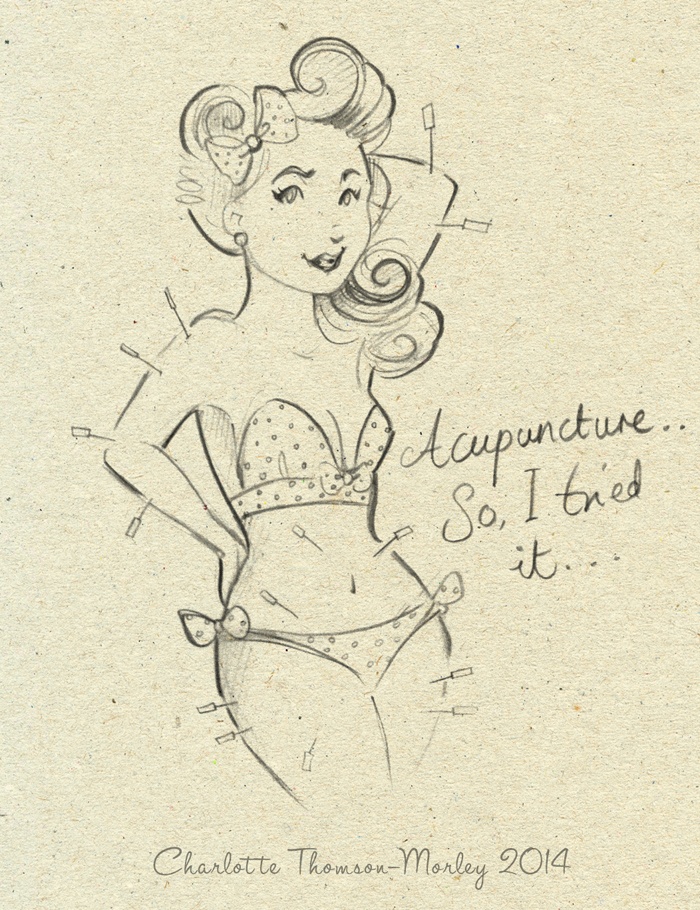 I’m a Fox Mulder “I want to believe’  when it comes to alternative therapies, I’m skeptical but I like to approach everything with an open mind. Health is high on the agenda in our house at the moment, it has been for some time but now, more so than ever! I suffer from PCOS so I’ve spent most of my life battling to alleviate my symptoms and balance my hormones in order to have a body that functions within normal parameters (as Spock might say).

I recently gave up grains (which has helped no end), removed chemicals from my beauty regime (no shampoo!) and cleaning regime (dirty house!). I’ve spent 2 weeks without booze and caffeine (though I’ve never been a big drinker of either) and have cut down my sugar and sweetener intake and processed food. The next step seemed to be something more drastic and my extensive research showed that Acupuncture shows a lot of positive results in regulating hormones and female fertility.

So naturally I asked for a few recommendations which led me to Acupuncture in Nottingham (aka Lindsay Lukehurst)! Lindsay has 25 years experience and practices her own tried and tested mixture of Traditional Chinese Acupuncture (TCM) and the even more ancient Five Element method of Acupuncture, so I had complete faith in her!

Last night was my first session, a 2 hour incredibly thorough consultation which my husband attended with me.  Lindsay was wonderful and put us at ease throughout the health questions (none of which my GP or doctors have ever asked!) and some more holistic questions. Within an hour she had 2 pages of handwritten notes which she then used to devise my first treatment.

Up on the trolley bed I went, skirt hitched up as needles in my legs and feet were a key part of the treatment. She took my pulse from various parts of my wrist and then we were ready for needles! I wasn’t sure what to expect but Lindsay warned me before she put each needle in so I was prepared. It was a bit ouchy,  it felt a lot more like a needle being jabbed into me than I expected it would (daft right?)
But once they were in, the sensation changed!

Each needle was placed on a pressure point, three in each foot, one in each knee and one over each ovary. Once they were in place I began to feel a warm sensation beneath each one, which became – what I can only describe as a small ball of tingling energy, I didn’t expect to feel anything quite so dramatic!

The needles were left in place for around 20 minutes, during which time we chatted (no cringey whale music thankfully!). In the last few minutes my legs suddenly felt like lead, but this subsided once the needles were removed and I could barely feel them being taken out.  Acupuncture requires a course of regular treatment to be effective, so we booked another session in a weeks time and I left feeling warm, positive and uplifted.

We arrived home and I felt fine but different in a way I couldn’t pin point. I had a bite to eat (I have to keep my blood sugar steady) and about an hour and a half later went to bed. That’s when it hit me, the strangest feeling, dizziness like the room spinning fast, but no nausea, like energy rushing around my body.  It subsided with a bit of yogic breathing. I have since read that this is quite common and possibly a good sign!

Today I’ve been hyper aware of the points where she placed the needles on my abdomen, like a dull ache, certainly not pain from the needle pricks, a deeper feeling, but my legs and feet feel normal. I don’t know what to make of any of this so time will tell! It was a fascinating experience and I look forward to seeing what effect is has over the next few months!

I’d also like to add a little disclaimer that the sketch is for illustration purposes only, I was in no way a human porcupine in a bikini! 😉